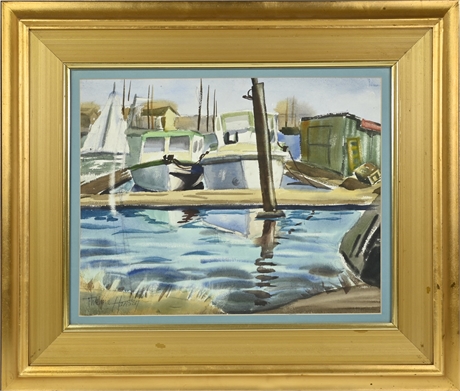 About the Artist:
Thelma Hanson (1911-1995)
Born in British Columbia on Feb. 7, 1911. Hansen studied at the Kansas City Art Institute and with Thomas Hart Benton during the early 1930s. After coming to California, she had further study at the College of the Pacific, Pescadero Summer School of Art, Peninsula Arts & Crafts, and with Rene Weaver, Peter Blos, Thomas Leighton, and Richard Yip. She spent most of her career in San Francisco with a studio on Russian Hill where she taught art. Called "Hats" by her friends, she was always seen wearing fanciful headwear. During her long career, she was the shipboard artist who drew passengers on the Matson Line ships Matsonia and Lurline. She also was the originator of the outdoor art shows in Golden Gate Park. Hansen died in San Francisco at Laguna Honda Hospital on May 7, 1995. Member: SWA; SF Artists Guild.