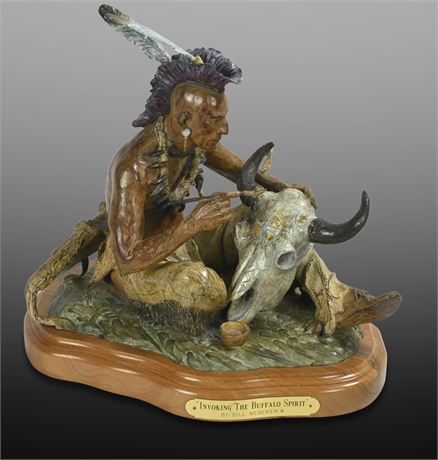 Bill Nebeker - "Invoking The Buffalo Spirit" (2001)
Dated 2001, 7/30
Bronze Sculpture
In the Native American culture the buffalo was the most essential animal in their entire culture. They used every part of the animal; the heavy buffalo hide for blankets, and coats, the bone for needles, cutting tools, and jewelry, the innards were used for bow stings, ties for moccasins and of course the meat was used to feel the tribe.  Even the killing of the buffalo was treated as a religious ceremony during the hunt.  It was also believed to be one of their most important spirit gods. When they needed power for a successful hunt, they would chant a spiritual prayer to the Buffalo Spirit by painting some “power” onto a skull. Here we see a Pawnee Indian seeking the blessing of his buffalo spirit for a successful hunt.
Gallery Price: $5,000

About the Artist:
Known for his detailed, well researched sculpture of authentic depiction of the historical American West in the tradition of Charles Russell and Frederic Remington, Bill Nebeker of Prescott, Arizona has been a member of the Cowboy Artists of America* since 1978.  Among his honors at annual exhibitions of the CAA are the Sculpture Award, Gold in 1989 and Silver in 1985; and Kiekhofer Award  for Best of Show, 1989.  In Kerrville, Texas, the Cowboy Artists Museum featured a 30 year retrospective of his work in the late 1990s.

He does not have traditional art training and describes himself as having irregular work habits, working sometimes intensely and then taking many days off.   He has been a full-time artist since 1976, and is devoted to realism and accurate depiction of his subjects, which include Indians, cowboys, frontier settlers and animals.   "When he sculpts Native Americans, he researches their culture, clothing, weapons and symbols to be sure his depiction is historically accurate, with the dignity they deserve." (CA).

Arizona has recognized Nebeker as one of its outstanding artists.  In 2009, he was named Arizona Culture Keeper by representatives of the Arizona State Historical Society who give the honor to an individual who "has made a positive impact on Arizona's history, culture or economy, and are pioneers of Arizona through family ties, business, civic leadership or passiona contributions to a cause that is distinctly Arizona." (CA).