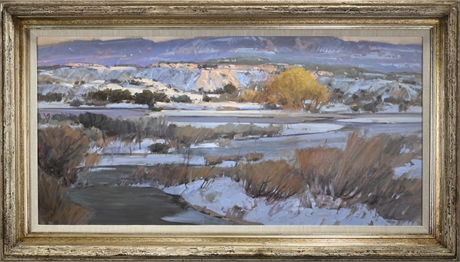 Artist Biography: (Courtesy of Windsor Betts)
Arturo Antonio Chaves (b. 1949)
Known for his large-scale landscape paintings, in 2000, Arthur Usner changed his name legally to Arturo Antonio Chavez in honor of his Mother's side of the family. He has been painting under this name and signs his paintings, "Arturo," since 2000. There was a period of one year that he signed his paintings Usner y Chaves as a segue and a means for collectors to make the connection to Arturo Chavez. Arturo illustrated one book using the name, Usner y Chavez, (Museum of New Mexico Press - 2001.)

Arturo Chavez was born in Embudo, New Mexico near Taos. He was raised amid the spectacular vistas of Northern New Mexico. Chavez is dedicated to preserving the landscape by painting it. Chavez painted throughout his youth, but did not turn to art as a full-time career until the 1980s. Since then, he has received international recognition for his landscapes, which include exhibitions in the US embassies in Moscow, Croatia, and Guyana. Publicly, Chavez’ works can be seen as part of the permanent collections at New Mexico State University, The Bernalillo County Courthouse, The Santa Fe Capitol Collection, the Taos National Guard, and the National Hispanic Cultural Center. His work is also in corporate collections around the world including Ebner International in Linz, Austria, Fuji Electric in Japan and the permanent collection of Burlington Northern Railway. Like many gifted artists, Chavez possesses many other talents. He is a talented musician, having studied classical concert guitar at the University of New Mexico, as well as having worked as a mission pilot for the civil air patrol. In his artistic process, Arturo Chavez uses a combination of “on location studies”, multiple compositional drawings, and intermediate painting studies that he creates in his studio to arrive at a finished painting for exhibition in a gallery or a museum. Arturo has garnered many awards including: 2005 National Park Service, Arts for the Parks Bronze Medal 2000-2006 New Mexico Art in Public Places, Acclaimed Artists Series (5 purchase awards) 2006 Hubbard Museum of the American West, Western Artists of America, Best of Show Award 2007 Hubbard Museum of the American West, Western Artists of America, Best of Show Award and Gold Medal 2008 Eiteljorg Museum of the American West, Quest for the West Show, Featured Speaker 2009 Best of Show (Victor Higgins Work of Distinction), Eiteljorg Museum 2010 Harrison Eiteljorg Purchase, Award Eiteljorg Museum Arturo is currently represented by: Gerald Peters Gallery in Santa Fe, NM Mountain Trails Gallery in Sedona, AZ and Jackson Hole, WY.