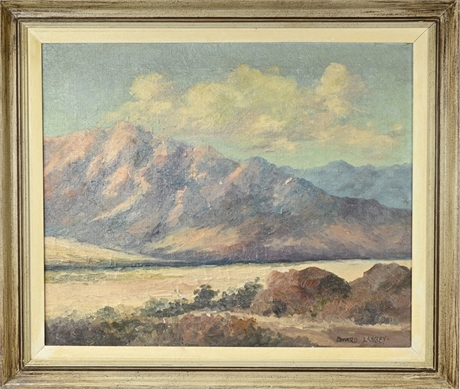 About the Artist:
Born in London, England on March 27, 1870. When quite young Langley was abandoned by his parents in Australia. Making his way to Canada, he traveled alone by canoe down to the Gulf of Mexico. In Chicago he worked with Wm Selig in developing the motion picture camera and became a U.S. citizen in 1904. Before that he had played trumpet in the Illinois State Guard for many years. Sometime before 1917 he came to Hollywood, CA with Selig where they produced the pioneer epic, 'The Spoilers." A few years later Langley became art director for the Fairbanks Studio on such films as "Thief of Baghdad," "Three Musketeers," and "Mark of Zorro." From 1921 until 1934 the Langley home in Los Angeles.