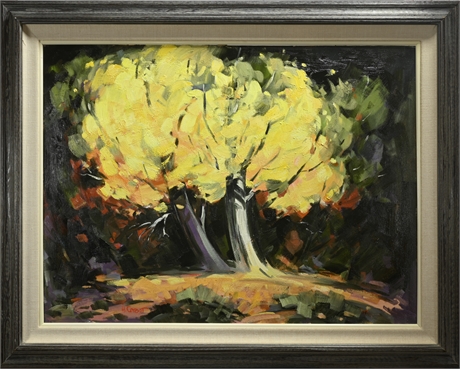 Boston born, Hugh Cabot was one of America’s foremost artists.
Hugh Cabot III (1930 - 2005), gained artistic fame at the age of 22 years having been appointed by the President of the United States and Secretary of the Navy to serve as a combat artist for the Korean War.  His war art hangs in Washington DC and belongs to the entire nation.
Cabot is best known for his bold, powerful Western landscapes and highly distinctive portraits of the iconic cowboy. His love for the western frontier began at age 12 when he was sent from his hometown in Boston to spend summers at western ranches. By age 14 he was obsessed with the Rodeo, horses and winning a Champion silver buckle. He spent over 20 years studying the way of life of the American Cowboy and perfected southwestern and frontier subjects as a painter, illustrator and sculptor.