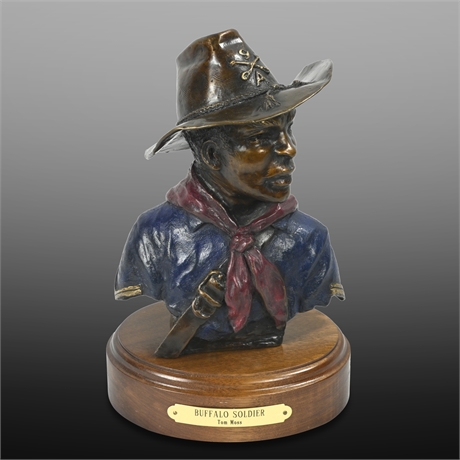 About the Artist:
Tom has been dedicated to creating bronze sculpture for the past 40 years. Most of his work is western: cowboys, horses, cattle, and Native Americans, but he has done many figurative and portrait commissions as well. His bronzes are collected throughout the United States, Canada, and Mexico as well as Europe and the Far East. He is in the collections of two Texas governors, Briscoe and Connelly, along with movie actors, an astronaut, and many other celebrities and corporations. Tom has been featured in numerous periodicals such as Southwest Art, Art of the West, Western Horseman, Equine Images, and many newspaper articles. Tom has spent most of his life in Texas, other than a three-and-a-half-year stint in Taos, New Mexico. Due to his support of the Texas Rangers, he was appointed Captain in the Former Texas Rangers Foundation. He created a special bronze at the request of the Texas Sheriffs Association, one for each sheriff of the 254 Texas counties.